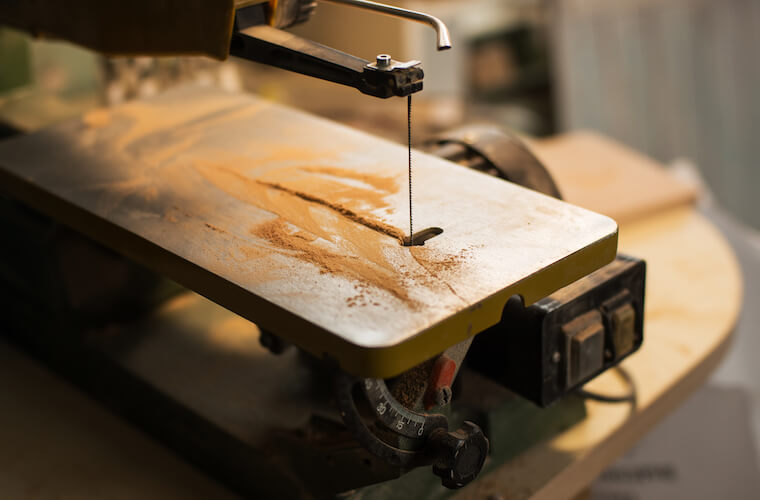 The difference between a scroll saw and a band saw can be tricky if you are looking at them from afar. However, when you come close and pay attention to the details, you will find that they are entirely different.

In this article, we will tackle the similarities, differences, use, pros, and cons of either of them, hoping you reach a detailed answer.

A scroll saw is suitable for making detailed cuts. It is good at cutting thin and short material.

On the other hand, a band saw can cut hard and thick material of any length. However, it is better for straight cuts than intricate detailed ones.

What Is a Scroll Saw?

A scroll saw comes with a flat work table. It has a column coming from its back, and on top of that column, there is an extending arm that is parallel to the table.

It uses a small vertical blade that runs perpendicular to the center.

What is a Band Saw?

A band saw also comes with a flat work table and has a blade that runs perpendicular to the center.

It is potent to the extent that, with the right blade, it can cut through metal.

This is just a vague idea about what each one of them is; however, for more details, continue reading the article.

A band saw is more powerful than a scroll saw.

It’s so powerful to the extent that it can cut through metal if you use the right blade. It can also cut thick materials up to 30 inches.

On the other hand, you can try cutting hard materials with a scroll saw by upgrading the blade, but its motor is not made to handle so much.

It can only cut material snot thicker than 1 inch.

The blade of a scroll saw is not its best feature. It is very thin and only 6 inches long.

It moves in an up and down movement, so to make room for their movement, you probably won’t be able to cut wood thicker than 2 inches.

To get great results, use 1-inch wood.

However, thanks to the short length of its blade and its ease of change, a scroll saw can make inside cuts or plunge cuts. This feature makes it the perfect power tool for making delicate designs.

The blade of a band saw is completely different from that of a scroll saw, though.

A band saw has circular and flexible blades.

It uses a two-wheel system, one above the table and one below it. They can even sometimes use four wheels. The blades stretch over these wheels and work as a continuous rotating band.

The teeth of the blades move in a downward motion only.

Moreover, the blade of a band saw is open at the front and back, allowing you to work with long pieces of material.

Scroll saws allow for versatility because they can use different blades.

Moreover, you can easily change their blades. You just need to get the tension right by using a tension knob.

Also, a scroll saw can make a wide range of cuts.

On the other hand, a band saw is not that versatile, for it is best suited for making regular cuts.

The throat is the distance between the blade and the rear part of the saw.

Most scroll saws have throats that are between 12 and 30 inches, which makes working with them limited.

The cutting surface of the blade faces away from the back column, so placing a long piece of wood will hit the column.

Moreover, you should keep a few inches free to allow yourself to move the piece of work around to make detailed cuts. So, for example, if your scroll saw has a 12-inch throat, use a work material that is approximately 20 or 22 inches.

Conversely, the throat of a band saw is only concerned with width.

The size of the wheels determines the throat since they give the blade its shape and determine the size.

Given that the throat of a band saw has nothing to do with the length of the work material and provided that its blades are open at the front and rear, you can use a band saw to make long rip cuts.

The only thing that limits the thickness of the material that you want to cut with a band saw is the space between the table and the top of the saw.

To sum up, a band saw can cut anything that fits in it. However, make sure that you leave some room to be able to control the work material.

When To Use a Scroll Saw?

As we mentioned before, they work perfectly with thin materials so that you can use a scroll saw if you are making decorations; their thin and short blades are great for creating detailed and clean cuts.

For example, if you need to hollow out the letter D, you can just drill a hole in the middle of the letter, get the blade through, and cut out the center part. So easy.

Mainly, they are the perfect tool for making jigsaw puzzles, and wooden letters, numbers, and names -given that they can make inside cuts.

However, it is not suitable for making straight or long cuts.

When To Use a Band Saw?

Since the band saw is more powerful than the scroll saw, it can handle thicker stuff.

As stated above, it can even cut metal if you attach a suitable blade for that.

Also, it is useful if you need to make aggressive straight cuts. Thanks to its blade that works in one direction only, the material you are cutting is never able to move out of its place in the slightest. This ensures that the cuts are going to be 100% straight.

If you want to get creative and do crafts and decorations using it, you can. However, the cuts will not be as precise and won’t have the same details as the cuts that you can produce using a scroll saw.

Given the above, band saws should be used if you want to make shelves, furniture, planter boxes, tables, and many more.

However, it can’t make inside cuts, so if you want to hollow out the letter D for example, you will fail miserably.

Hey, I see you have made it all the way till here, bravo!

Take a deep breath, reread the article, consider why you want to buy any of them, and then make an informed decision.

Since they are two very different saws, I recommend that you get them both if you have the money.

Scroll back to top